If you have an outboard motor or an internal drive, and they are not powered by electricity, you need fuel for the boat could move upstream or go to open sea. Naturally, you have to store that fuel somewhere, and that “somewhere” is usually a gas tank. Most of the time, you need to choose it on your own, since your choice will depend on the engine size, how much gas it consumes, and the operating conditions. If you plan a long trip, mounting a large tank is entirely rational. However, there are other nuances you need to account for. 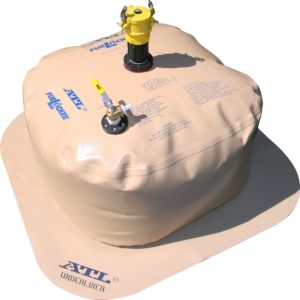 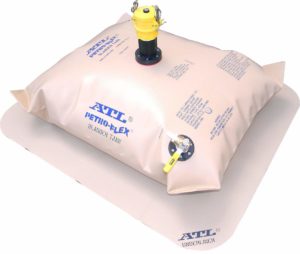 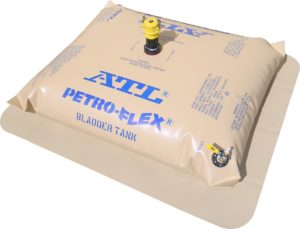 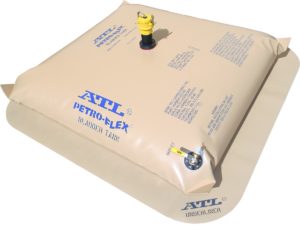 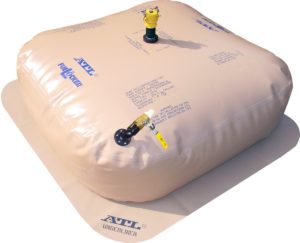 Here we are dealing with a spacious, and most importantly, reliable fuel tank. Its capacity is 50 gallons. But that’s not enough for unusually large boats. This is quite a decent indicator, especially given the fact that this tank is suitable for both gasoline and diesel fuel. With this tank, you cannot be afraid of overheating, and pressure rise since the valve for pressure relief will perfectly cope with its role.
The most important advantage of it is that the tank can be simply rolled up and stored in the tote bag, saving valuable space.

If you have a medium-sized boat, then this small 25 bladder will do the job. Usually, I wouldn’t call anything 25-gallon “small,” but its counterparts are magnitudes larger.

I wouldn’t advise this fuel bladder for a small inflatable boat, but for a motorboat, it’s definitely more than adequate.

It doesn’t have FueLocker, though, but it makes it a lot cheaper than other bladders. Too bad it doesn’t feature a tote bag as well.

If you want to get serious, you need more than just 50 gallons. And a typical medium motorboat is too light for this kind of fuel tank. After all, we’re talking about 75 gallons. You could refuel a yacht with this much fuel. Well, not a large yacht, but it would suffice to run it from New York to Miami. Probably, don’t take my suggestion as a piece of advice. You probably would not want it for a motorboat.

A hundred gallons is overkill for most people’s purposes. Me, I don’t have anything I would need this fuel bladder for. Perhaps, you do?

That’s a lot of fuel, and at this point, it is getting ridiculous. But if you do have a large boat or a yacht, then this is what you should choose.

The biggest I could find. That a Behemoth of a fuel bladder. I can’t think of any vessel short of a hauler or an actual ocean faring yacht that would need that much fuel.

Since the fuel bladder comes with FueLocker, it’s ridiculously expensive even for its type and capacity. If you need as much fuel as possible, this is the only viable option.

Choosing a fuel bladder is not as hard as you would think. After all, they have to meet all the safety standards to even be on the market. That said, there are a few things you should pay attention to get desirable results.

For those who choose a fuel tank for their engine for the first time, it would be beneficial to get familiarized with the selection criteria.

There’s no kill like overkill. The worst thing I can think of is buying something and then never using its key features. On the other hand, a boat is not a car, which means that it will not be possible to refuel it at sea, so you probably want more capacity rather than less. At the very least, you want to have an extra canister of gas on board.

When choosing a tank volume, you should focus on the fuel consumption of the motor. Also, make sure to account for how often you sail and for the average duration of your boat trips. Basically, you need to calculate how much fuel you would typically need, add from 30% to 100% just to be safe, and then make your choice.

It is imperative that the material the fuel bladder is made of is durable. Since gasoline and machine oil both are, in fact, toxic and corrosive substances, poor-quality plastic can deteriorate over time. And that can have lots of consequences. It is okay if it is just a soiled boat, but fire may break out as well. It is best to buy fuel bladder made of durable plastic.

Some engines work on a mixture of kerosene and gas. In that case, you should have two fuel bladders, one for kerosene and one for gas. Kerosene tanks and bladders have to be exceptionally tight since kerosene is very fluid.

Then there is mechanical damage to consider. Resistance to it is significant for the strength of the tank and especially a fuel bladder. Fishing often requires some pretty active and dangerous moves. If you cast a bait, and the hook bites into a poor-quality fuel bladder, you can see how it’s going to go wrong. Even if you have a rigid fuel tank, the weight can make a crack on impact, and the gas fumes accumulated inside are going to escape unimpeded. That’s an explosion risk, no matter how small, and a palpable risk of drifting without fuel in the middle of an ocean. Not very pleasant.

All in all, the bladder material must be durable, chemically resistant, and elastic.

You have to be wary of the sun since it causes pressure to grow. When the bladder is heated, the fuel evaporates, and the pressure increases due to the gasoline vapor. If the fuel tank does not have a way to reduce the pressure safely, like a safety valve, it’s a fire hazard waiting to happen.

Monitoring the Amount of Fuel

With fuel bladders, it’s easy. You can still err because of gas fumes inflating the bladder, so it’s good to have some other method to check it. With rigid tanks, it’s more of a problem.

But why is that such a big deal? It’s just a precaution. Each time you go fishing on a boat, you need to check how much gas is left in the tank. This will help you not to stall in the middle of the lake at the most crucial moment.

To help you with that, manufacturers usually paint markup on the walls of the tank, which should allow you to see the amount of liquid in the gas tank. But it’s only helpful when the material is translucent, and that’s usually not the case with fuel bladders.

But there is another way to monitor the fuel level. More sophisticated tanks and bladders come with fuel sensors used to determine the fuel level programmatically. The tank has to come with a screen to read the data, but it doesn’t have to be anything flashy, so that reduces the price drastically.

Finally, you can use the old-fashioned method: put a cord or a stick in the hole in the tank, pull it out, and check how much of it is soaked. But this method can contaminate the fuel, and it’s not suitable for horizontally oriented fuel tanks and most fuel bladders. It is better to choose a tank that has this problem solved by the manufacturer.

When choosing a fuel bladder, you need to pay attention to such elements as the hose, fittings, and seals. If they leak when under pressure, all that high capacity is worth nothing.

The lid, while not the most crucial element, is still quite relevant. It has several functions: it prevents fuel leakage if the vessel rocks and pitches; it stops foreign bodies from getting into the fuel; and finally, it controls the internal pressure.

A good lid is not an ordinary cork. It’s bound to have an intricate design. Even if the lid has the appearance of a regular cork, it’s still going to have seals.

Replacing the stock lid is a pain, so I really advise not to lose it. It’s simpler than you would think it is. If the boat is idle for a long time, lids tend to disappear in the unknown direction magically. I never did manage to recover a single one. And all the replacement lids suck for some inexplicable reason and lose their sealing qualities reasonably quickly.

Don’t be me, please.

Today, you can find two fuel tank types: rigid tanks and fuel bladders. In both cases, the material is mostly plastic. Those plastics are very different, though, but hey both have to be durable and leak-proof.

For fuel bladders, leak-proof material is an essential feature. It’s easy to achieve with rigid tanks, but fuel bladders take shaped as they are filled with fuel, much like a balloon filled with water does. Accordingly, with each gallon consumed, the tank will “deflate.”

A rigid fuel tank is just that. It’s a fuel-tight container filled with fuel.

Fuel bladders will take the shape of the contour it comes in contact with and volume that allow space. Besides, it is always possible to check how much gas is left in the tank. Since the taken volume decreases as the gas is consumed, the accumulation of fumes is not really a thing. From a security point of view, that makes fuel bladders optimal.

They are expensive. Really, really expensive. Unless you want to mount one on a military or rescue boat, you should have an excellent reason to buy a fuel bladder rather than a traditional fuel tank.

As far as extras go, manufacturers have come up with several nifty details.

Consider a handle, for instance. It makes carrying the tank or fuel bladder extremely convenient for the operator to carry. Digital sensors allow you to monitor fuel consumption and tank pressure. Extra filters clean the fuel mixture before it even gets to the engine.

However, all that is going to cost you money. The extra features are not the only thing to affect the price. Aside from them, the price depends on the material of the fuel bladder, its capacity, and the brand. Fuel bladders are also much more expensive than traditional fuel tanks.

Portable fuel tanks with a capacity between 2 and 8 gallons will cost you from 30 to 60 dollars. Also, if you want to have an automatic sensor or an extra filter, then you will have to pay for them, as well.

A fuel bladder is going to be twice as expensive as a rigid fuel tank. A 25-gallon fuel bladder will cost you almost $600.

And then there is the matter of brand recognition. A no-name product will cost you cheaper, and if it works fine, it’s okay. However, there is a problem with accountability if we’re talking about foreign brands, while domestic brands may have issues with things that big names have long left behind.

Should I Buy a Rain Suit If My Jacket and Pants Are Already Waterproof?

Waterproof clothes seem like reasonable protection against rain, but that’s just appearances. I don’t know if your jacket is waterproof and how good it is, but there’s this thing called waterproof ratings. Most of the regular clothes, even those designed for fishing, have a limit waterproof rating, often less than 5,000 mm. That may be enough for light rain for a brief time, but nothing above that. Textile waterproof gear tends to be quite low on the waterproof rating spectrum unless it’s also lined with membranes, and even the best textile clothing can only hold out for so long.

So even if your regular jacket is waterproof, I recommend having a good rain suit on hand, because if you expect to be in the rain all day long (which you will if you regularly spend your time casting the bait) or in icy conditions, you are going to want that protection. Besides, it feels quite nice to throw on that extra layer on the outside. It’s going to give you a complete blockage of water and wind. As you can guess, it will instantly make you comfortable, no matter how cold and wet it is out.